Care leavers and the prison system – views from those who know 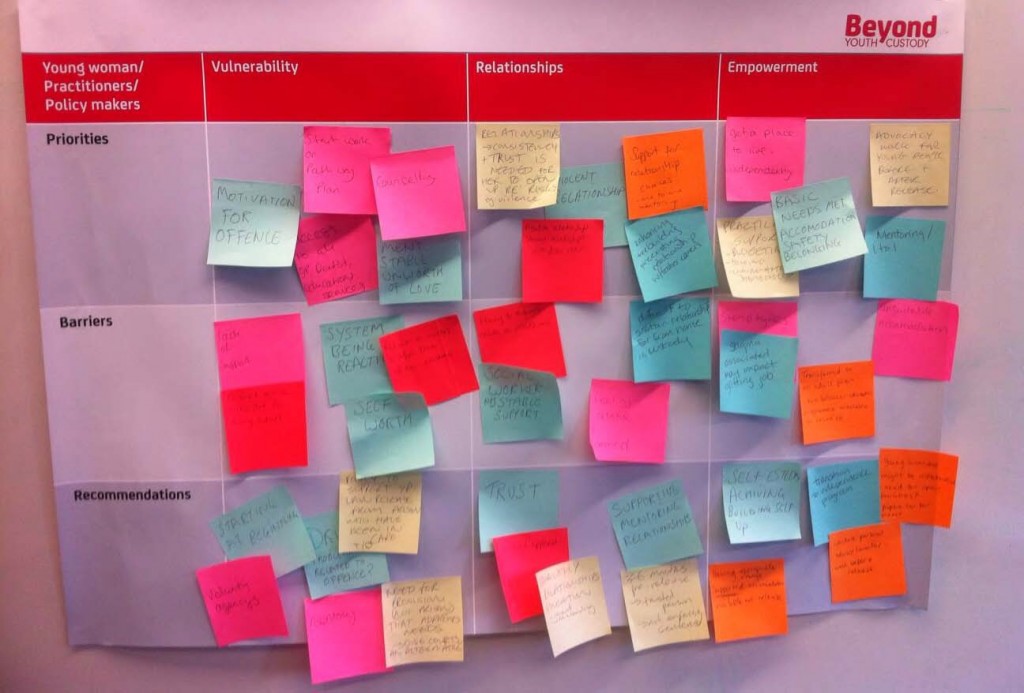 As part of National Care Leavers Week (27-31 November), Beyond Youth Custody teamed up with Safe Choices to deliver a workshop at the Annual Care Leavers Conference.

The purpose of the workshop was to explore the resettlement needs of girls and young women leaving custody who have previously been in care. Our research shows that because of the specific vulnerabilities and needs of girls and young women, practice with this group needs to shaped by three related gender-sensitive dimensions around women’s vulnerabilities, relationships and empowerment.

The workshop was attended by young people who had experience of care and custody, practitioners and other stakeholders involved in supporting young people. The groups considered a case study about a young women who was leaving custody and identified her priority needs and the barriers to meeting these needs, and went on to suggest recommendations for future policy and practice.

Some of the barriers that were highlighted included how the stigma associated with offending can impact profoundly on employment and housing, the grey area of who takes responsibility for which aspects of a young person leaving custody and the lack of choice and inconsistency of services that can arise between local authorities.

Two main suggestions arose from the event. One was that a tailored approach can look at individual needs and involve the young woman in choices about her resettlement plan. The other was that the introduction of a personal adviser or mentor three to six months before release can ensure that consistency and trusting relationships are built.

Those involved used their experiences to stimulate debate and make recommendations. When leaving, those taking part were asked to write down one thing that they would do as a result of the workshop. Their answers included:

The conference was organised by the From Care to Independence programme, run by the Prince’s Trust. From Care to Independence and Beyond Youth Custody are both England-wide learning and awareness projects funded under the Big Lottery Fund’s Youth in Focus (YIF) programme, which aims to support vulnerable young people through changes in their lives.

Safe Choices delivers a gender-specific approach to support young women leaving care and custody. It is delivered by The Children’s Society in partnership with the nia project and is also funded by YIF.